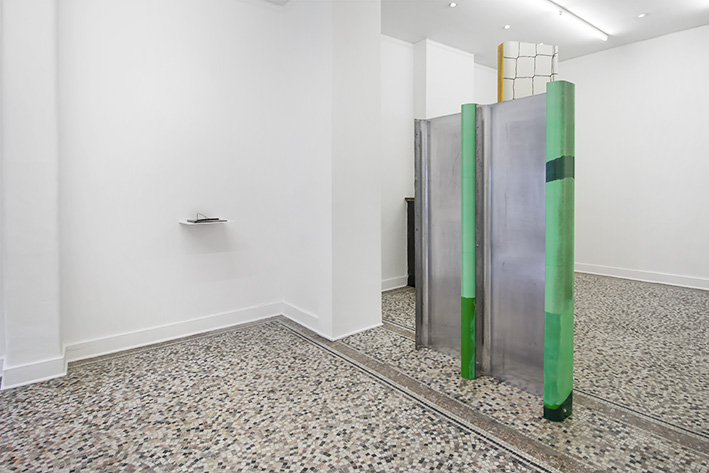 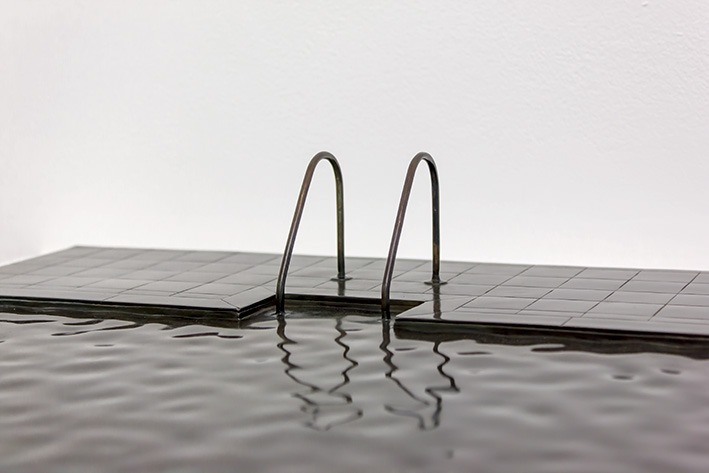 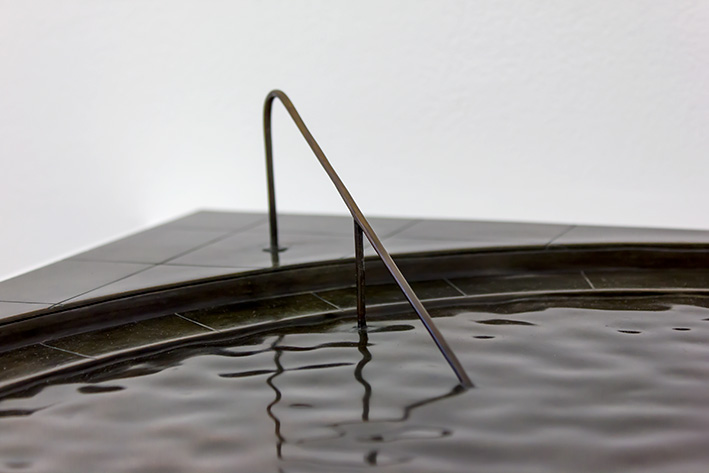 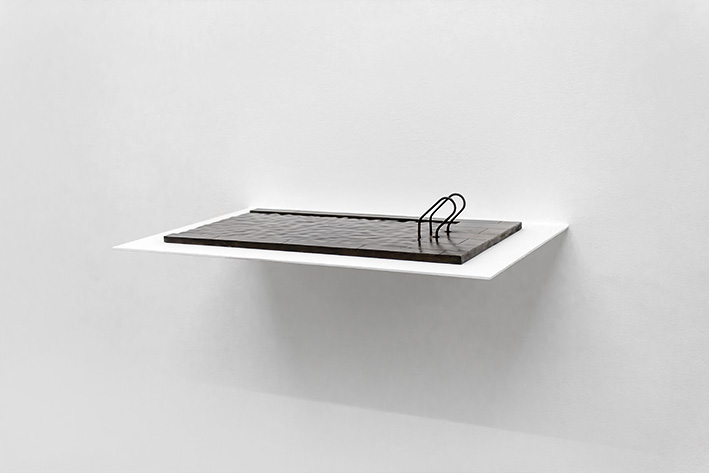 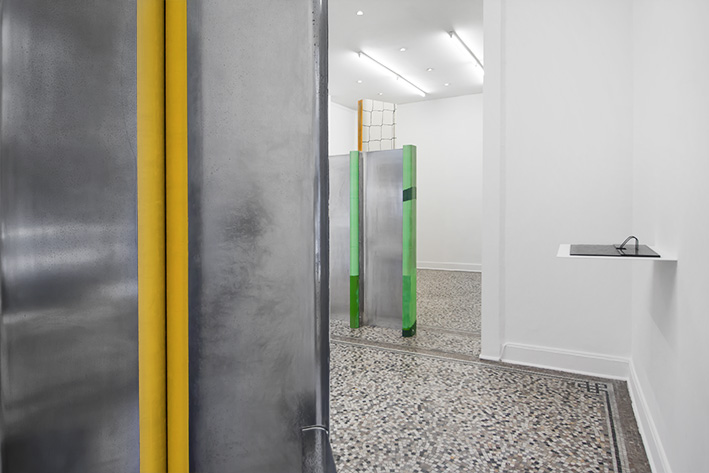 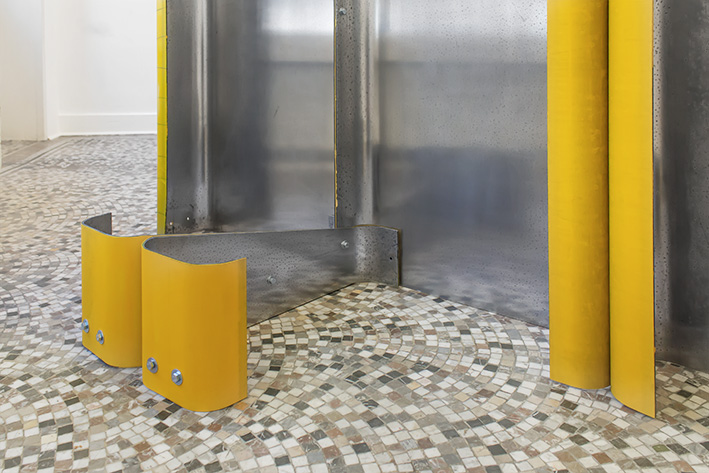 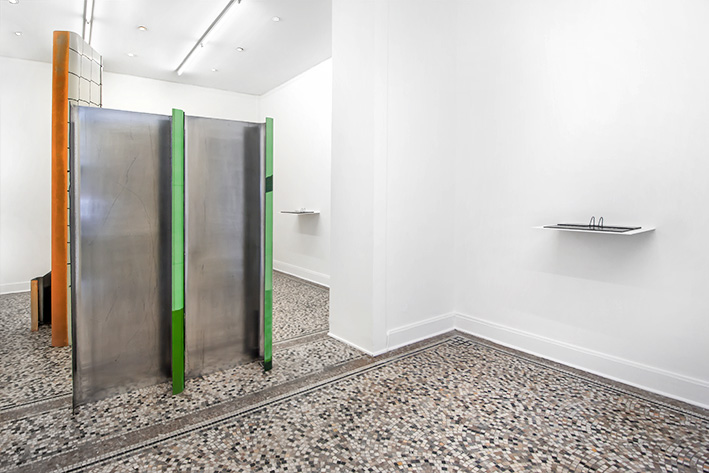 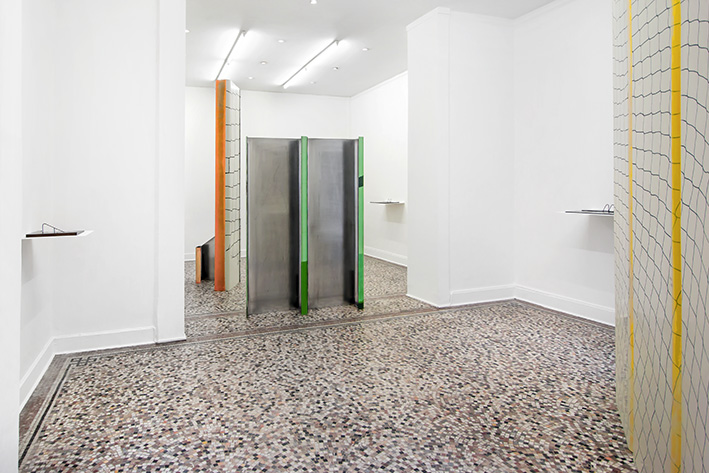 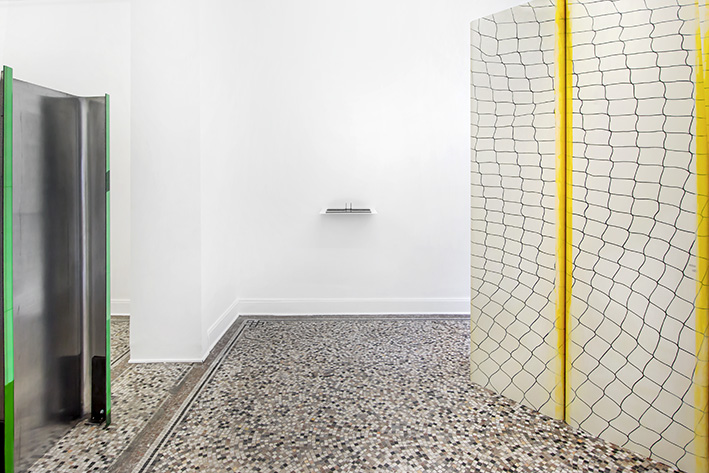 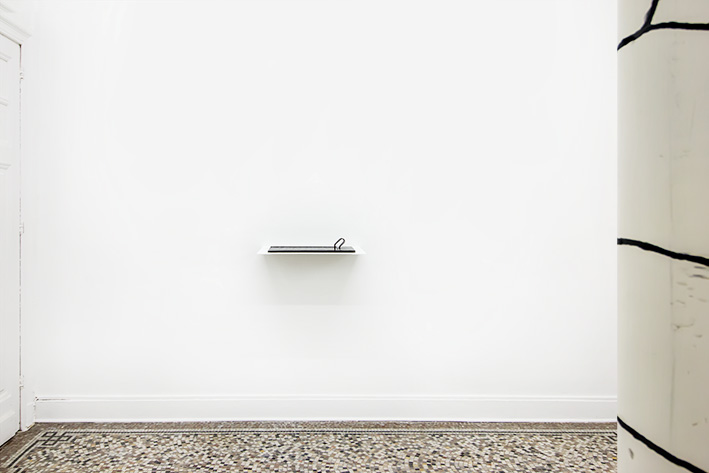 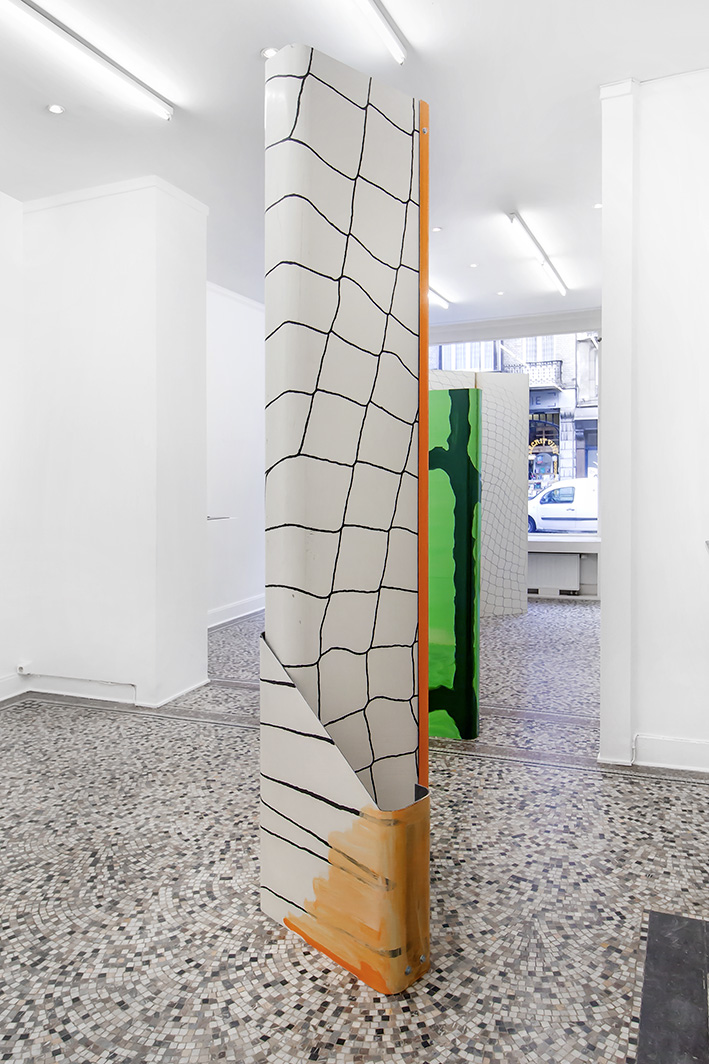 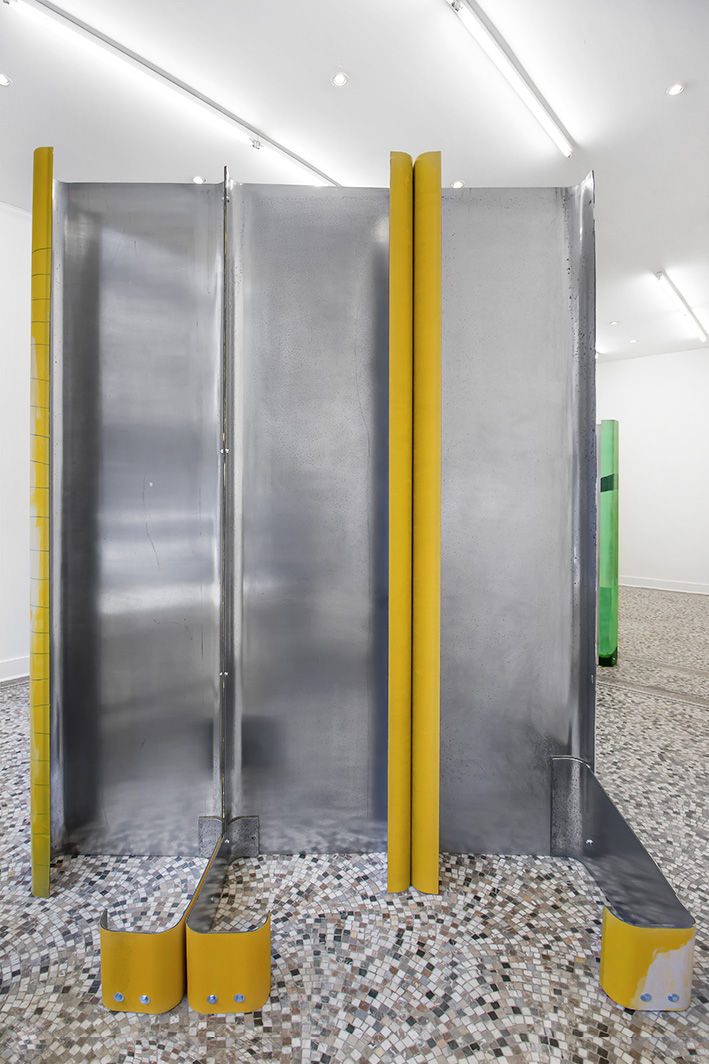 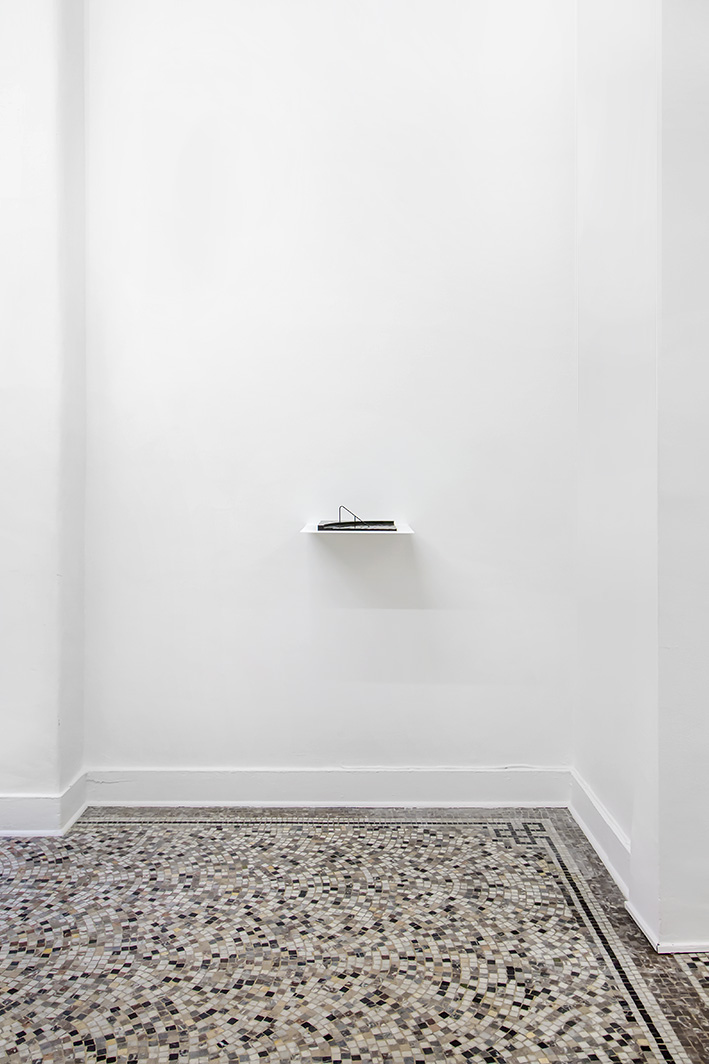 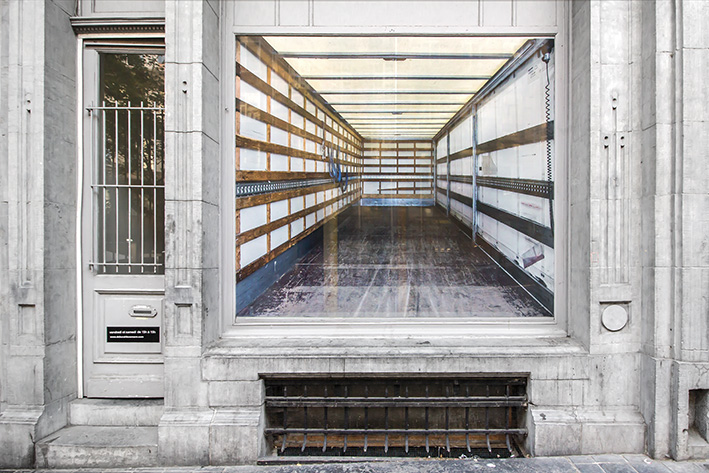 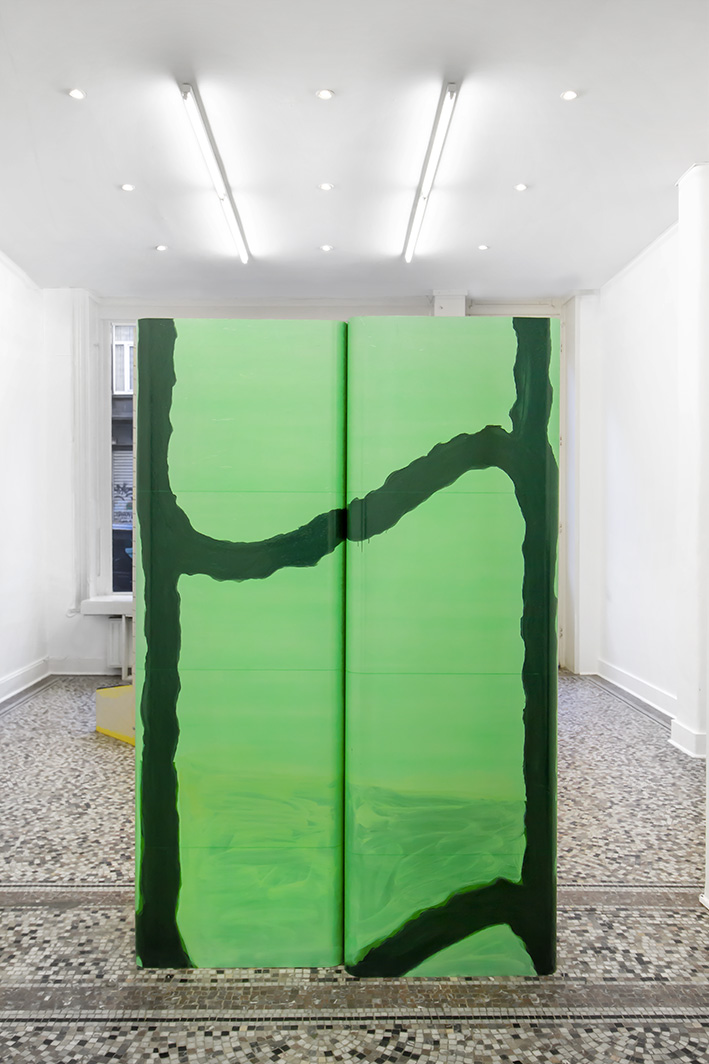 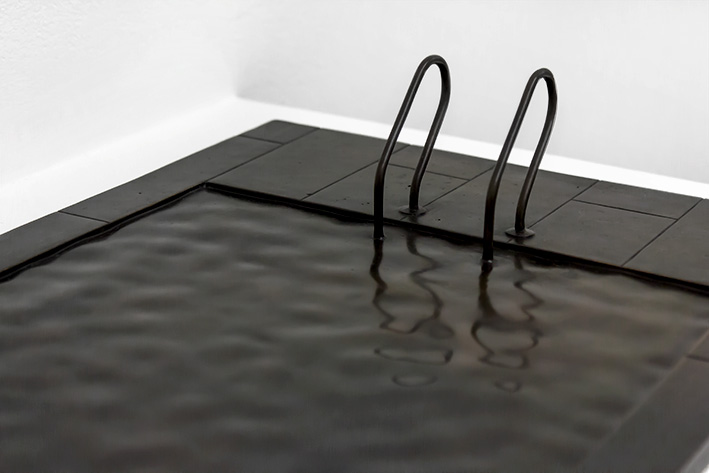 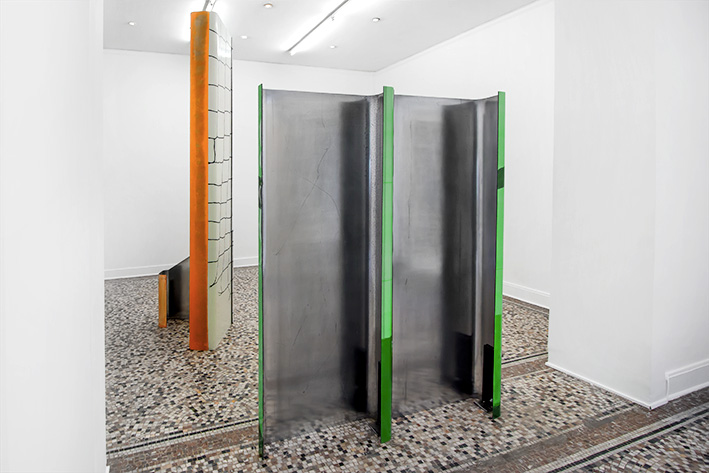 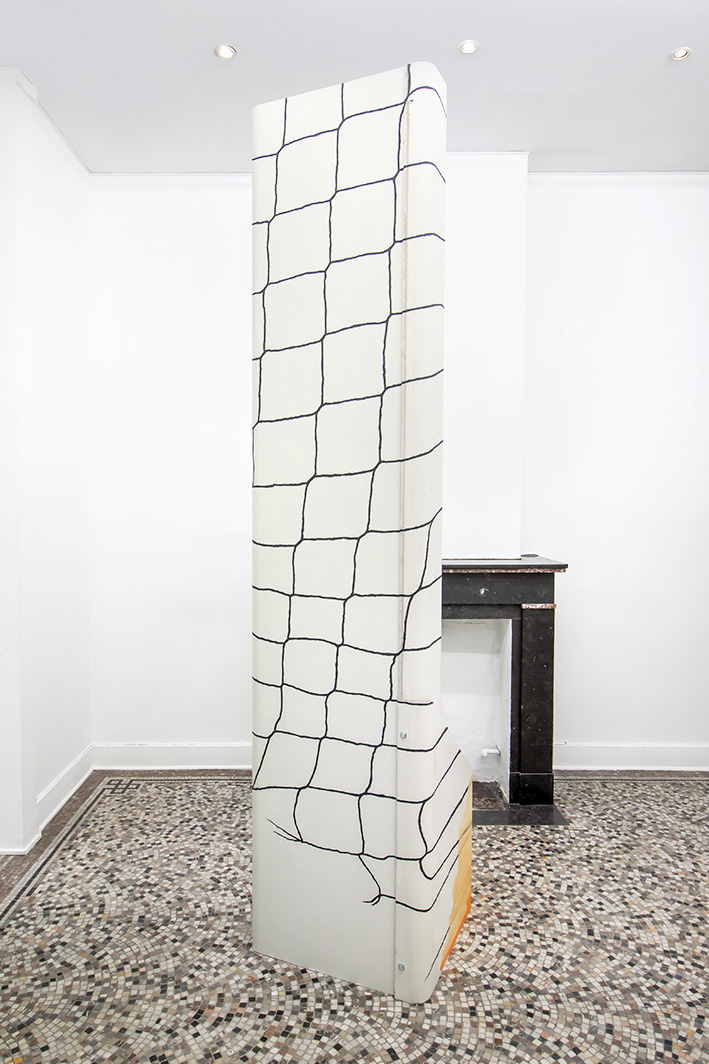 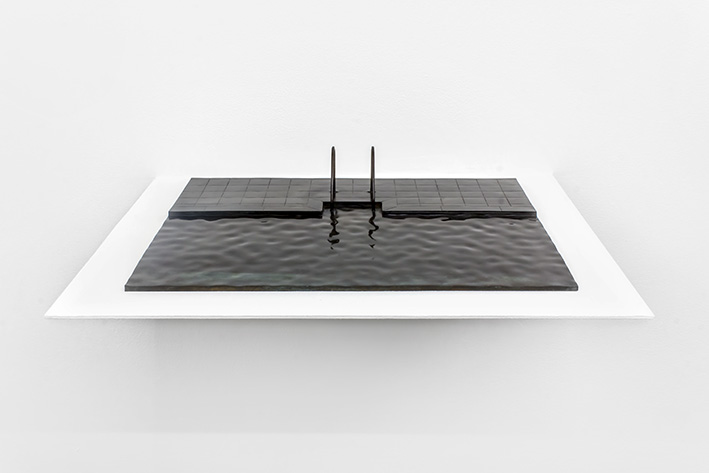 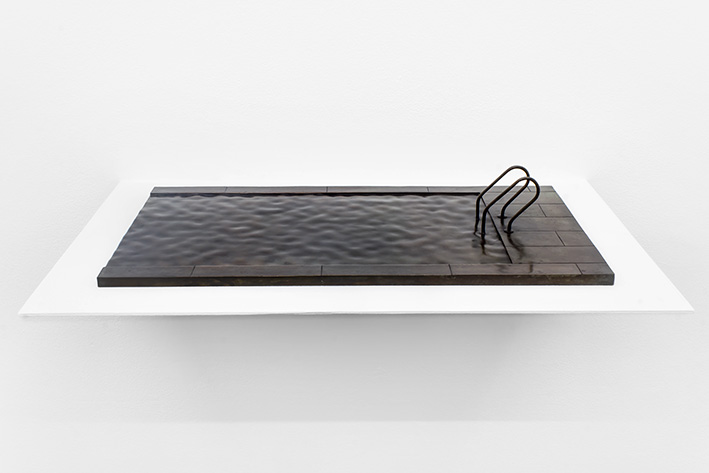 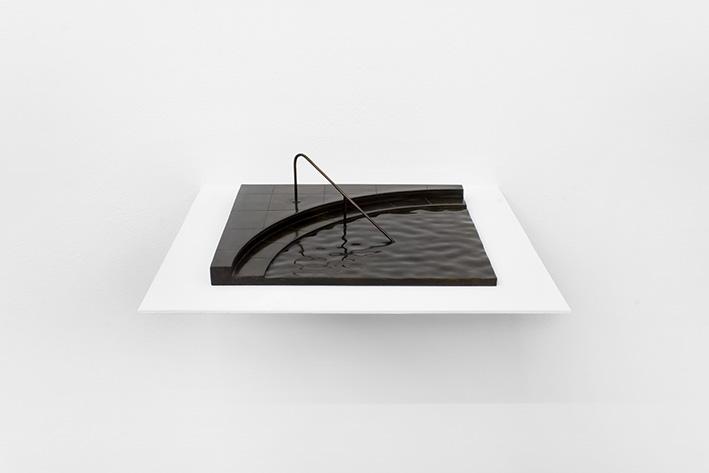 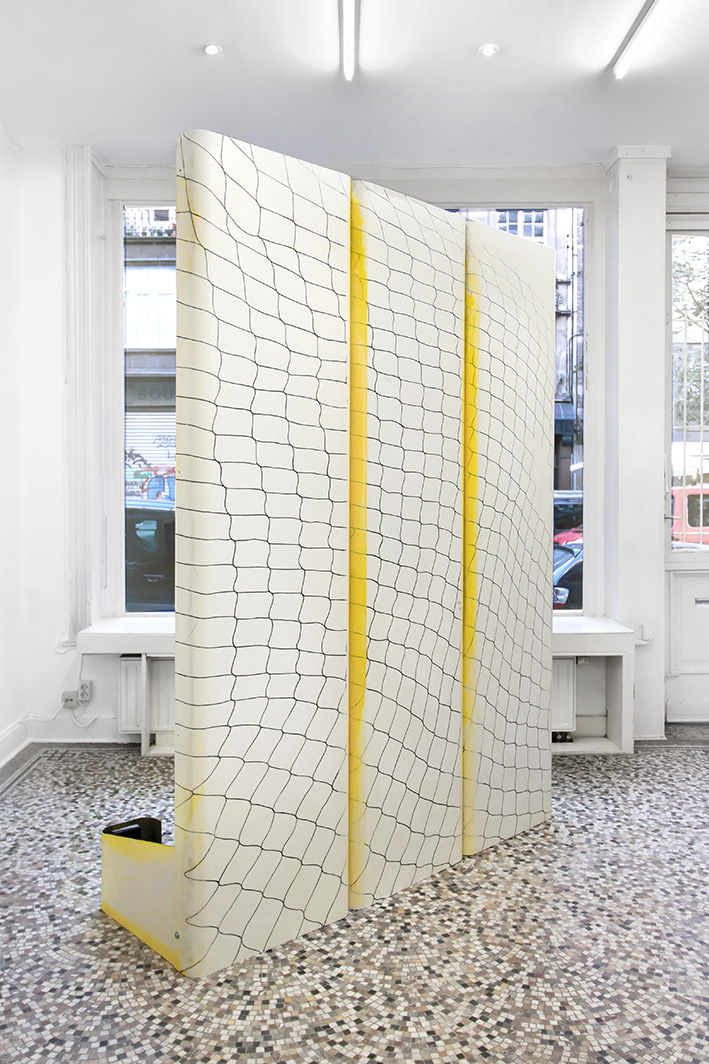 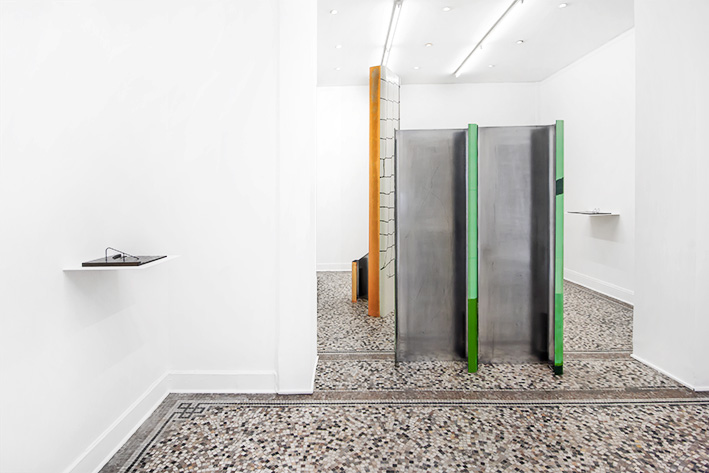 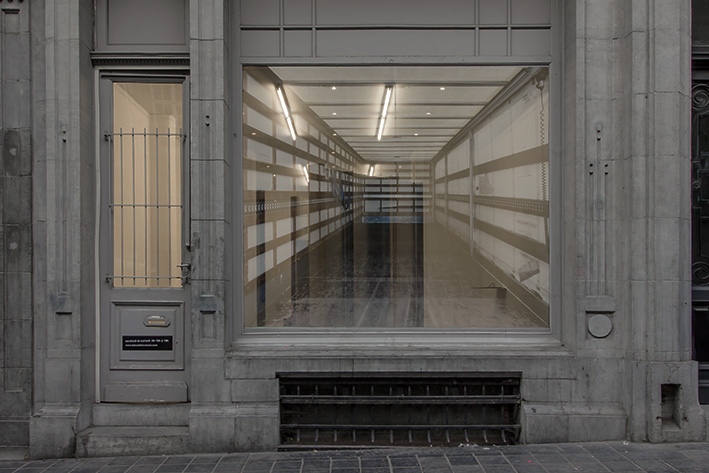 Deborah Bowmann Brussels, its representatives and Deborah Bowmann herself are thrilled to present Crooked Positions a duo show with Charlotte vander Borght and Felix Kindermann, bringing together three new bodies of works. While both artists approach scale, perception and material in contrary ways, their sculptural works find complementary unity in their skilful exploration and painterly suggestions.

From the street, viewers initially “enter” the exhibition via Space, Charlotte vander Borght’s large-scale photograph of an empty shipping truck interior printed on micro-perforated vinyl (a material used for advertising on buildings and transit vehicle exteriors). Part of a series exploring flux, transfer, flexibility of bodies and commodities, the work suggests a journey with no knowledge of the destination, hinting at both the transnational transportation of goods and the cross border movement, questioning the impact of our increasingly commodified and interconnected culture on our everyday lives. A self-acknowledged piece of trompe-l’oeil, the image offers a false depth through the window, at the same time inviting viewers into the space beyond, the inside appearing softly through the picture like a ghost.

Once inside, Kindermann’s series of cast bronze sculptures Holding Breath continue this confusion. Using 3D computer rendering before cast in bronze, the perfectly executed models contrast with their dark painterly patina. Nearly as flat as vander Borght’s image leading the visitors inside, they have a similar effect, pulling our eye to their polished surfaces as if to stare through them right into infinitely deep water. Their model-based scale intrigues and plays with our perception as a subversive carrier of possibilities increasing the imaginative space. Kindermann’s pools seduce our mind to slide down their ladders, but at the same time their materiality refuses our entry. Gaston Bachelard described this mysterious ‘aura of the miniature’ in his Poetics of Space (1958), ‘which the eye can penetrate – without the body, so to speak, but without forgetting the physical experience.’ Based on photographs from luxury real estate magazines where the private pool is symbol of pleasure and status, Holding Breath functions as a backdrop of tragic and desillusion, as for the surreal journey of protagonist Ned in John Cheever’s The Swimmer (1964). Like musty dark artefacts from bygone times Kindermann’s pools point to the inequality in today’s society, reminding us to even another novel: like in John Steinbeck’s Of Mice and Men (1937) the green pool’s musty water plunged into the evening sun is a metaphor for the two protagonists futile hope to escape the working class.


In contrast, Charlotte vander Borght’s painted sculpture series MASS draws our attention upward and around, sliding along those large scale vertical sculptures where the painted rendered outer curves contrast with the rougher interior surface on their backside. Physically imposing but yet light in their materiality, the sculptures are made of dibond panels salvaged from a facade of a modernist building in Paris. Initially industrial, Charlotte vander Borght repurposed, reshaped and reassembled them, hovering between abstraction and figuration. By painting in various sizes and shapes the motif of a safety net, usually enclosing spaces or buildings as an outdoor material, she zooms in and out for its closer inspection. Bringing together the found panels with the painterly strokes of the artist’s hand, vander Borght engages with both, the architectural but also sculptural history of modernism and the gestures of abstract expressionism. MASS suggests destruction and creation at once.

Walking through the exhibition, viewers confront the proximity of their own bodies to the objects, trying to navigate the strange landscape they delineate.

EXHIBITIONS
PRODUCTS
STUDIO
ABOUT US
BACK TO COLLECTIONS